Being an Independent Researcher

Recently Nadia Eghbal posted about the history of independent researchers. One crucial point (hinted at in her article but I don't think is explicit enough) is that to be a researcher you don't need to have a big organization behind you or credentials, but you do have to publish. Sharing research, both the successes and failures, is what makes science work. If you hoard away your research and keep the results a secret then you aren't a scientist, you're an alchemist.

So with that in mind I thought I'd shared some of the research I've done in my previous jobs that didn't make it out. I have published about my programming language research and Ideal OS, both of which were things I worked on in my spare time during the three years I was a researcher at Nokia, but I never talked about the actual projects we worked on.

In Nokia's Advanced Engineering group we were tasked with exploring new technologies and new markets that Nokia could potentially productize. In particular we worked a lot on smart home and wearables technologies. In the end almost none of this work was productized and the group was shut down after Nokia re-organized from the MS divestiture and Alcatel investiture; so I don't mind talking about what we learned.

At Nokia we looked at smart watches, fitness trackers, smart badges, and other small devices you could easily wear. Our final determination was that there is no money to be made in these devices directly. Wearables are not a whole new platform to build businesses on. Instead they are extensions of existing platforms. In the consumer space most of the money will be made by the smartphone incumbents Apple and Samsung. In the enterprise space the money will be made by existing security, medical, and industrial companies; and the real money will be in the integration portion, not the hardware. This is not to say the efforts aren't worth while, but that there is no low hanging fruit left.

We made this determination in 2014 and the following four years have mostly proven us right. The only smart watches that have taken off are the Apple Watch and Samsung's Tizen based watches. Android Wear is essentially dead and the standalone fitness market is pretty small. Quite a few Fitbits are sold each year but most people stop using them after a few months.

In our research we also learned that setup and security would be a challenge. Widespread deployment of Bluetooth LE has mostly solved the setup problems. Every device comes with an app and the app does all of the pairing work. Device security has largely not been a problem because these aren't open platforms, just locked down accessories managed through an app. Data security is another issue, but almost all leaks occur on the cloud side, not from insecure devices.

We also did some work on smart badges and smart meeting rooms; as well as a potential enterprise wearable where the entire computer is in your device and just connects to new inputs as you move around. In the end we discovered it was better to use an existing phone with custom apps than build new devices. Widespread use of NFC, BLE, QR codes, and two factor auth has proven this to be true. No one wants a new device if the hardware can be replaced by an app.

This all sounds a bit depressing. We didn't building anything cool and new, right? True, but in those failures we discovered new feature ideas that we haven't seen turn into products yet (or that are only in the startup phase).

Here's a good example. In most companies the physical meeting rooms in a large building are matched one to one with entries in the calendar database so that people can book a room. However, the physical and digital aren't actually connected. The web calendar interface can't show you if anyone is actually in that room right now. The physical room doesn't have a sign telling you what should actually be happening in that room right now from the calendar. There is a lot of low hanging fruit that is just tying existing systems together in better ways.

Another thing I worked on while at Nokia was this thing called the Brainshell. It was not an official project, but done while I was there. The idea was a word processor for thinking, though in the end it might be more of a notebook style interface, similar to Mathematica. I got the idea from seeing a Stephen Wolfram presentation at SXSW a few years ago.

At the time everyone was saying 'data is the new oil'. If that is true then we need much better oil refineries. My idea for Brainshell was a single symbolic and visual interface for tying together disparate live data streams and databases and algorithms. Here's a screenshot of an early prototype. 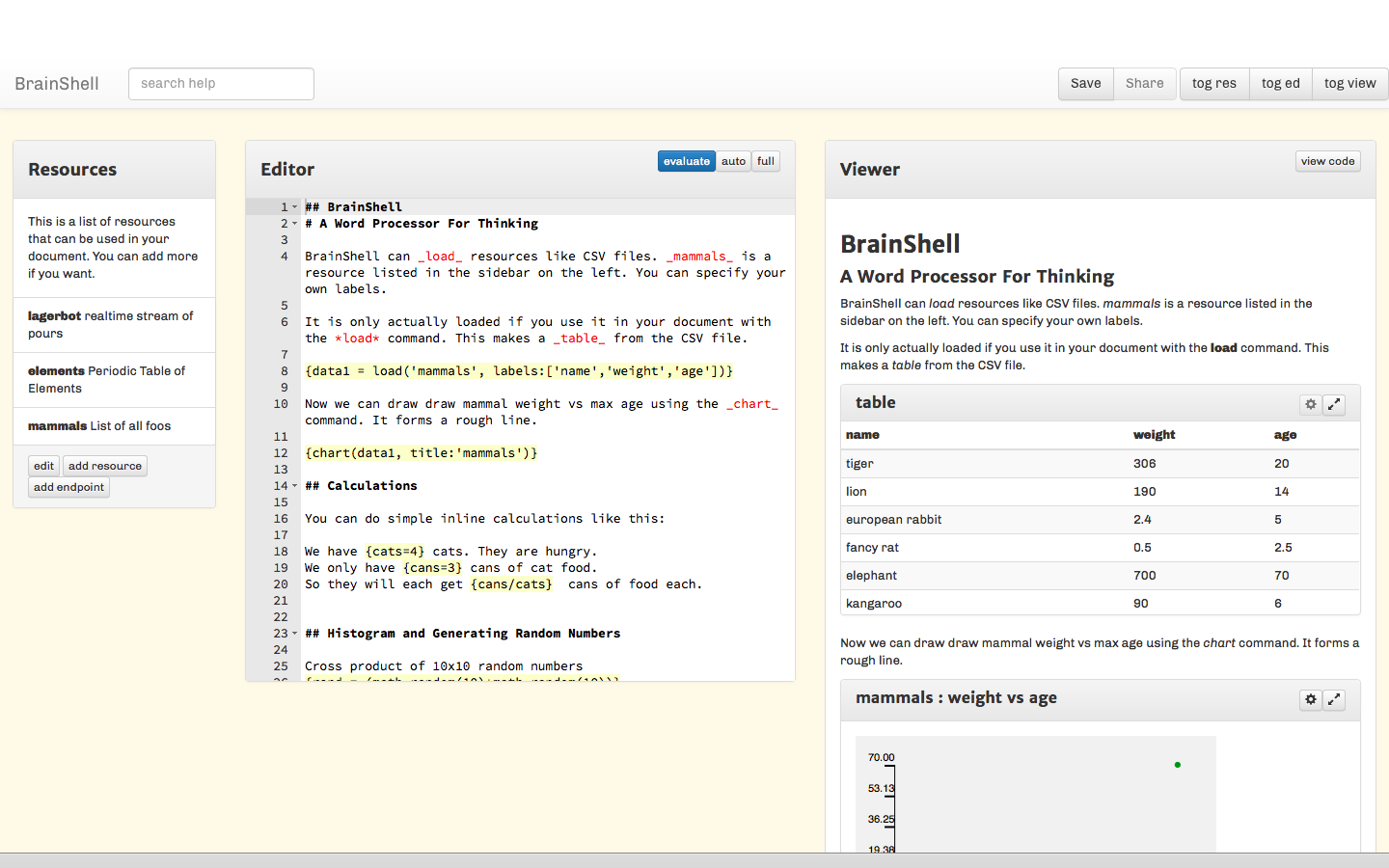 In this version it was a modified markdown editor with inline expressions that were evaluated at render time. The expressions would produce graphics and charts which had their own visual controls. Thus you could work at both the symbolic level or GUI level to adjust the settings. In theory this would make it easier to work with.

In practice the transition from markdown with embedded expressions to rendered view was too confusing for non programmers. So I reworked it into this:

The focus became the expresssion language which was designed to be intuitive with a very simply and forgiving syntax. I still think this is a good idea, turning it into a sort of open source version of Wolfram Alpha. That was easier to use and embed.

Sadly I never had the time to take this concept any further. I did pull out the expression language into a separate project called Tally Cat, and later Jesse Calc. It's a units aware calculator so we can answer Jesse's questions like how much milk would my bedroom hold if we filled it to the top. 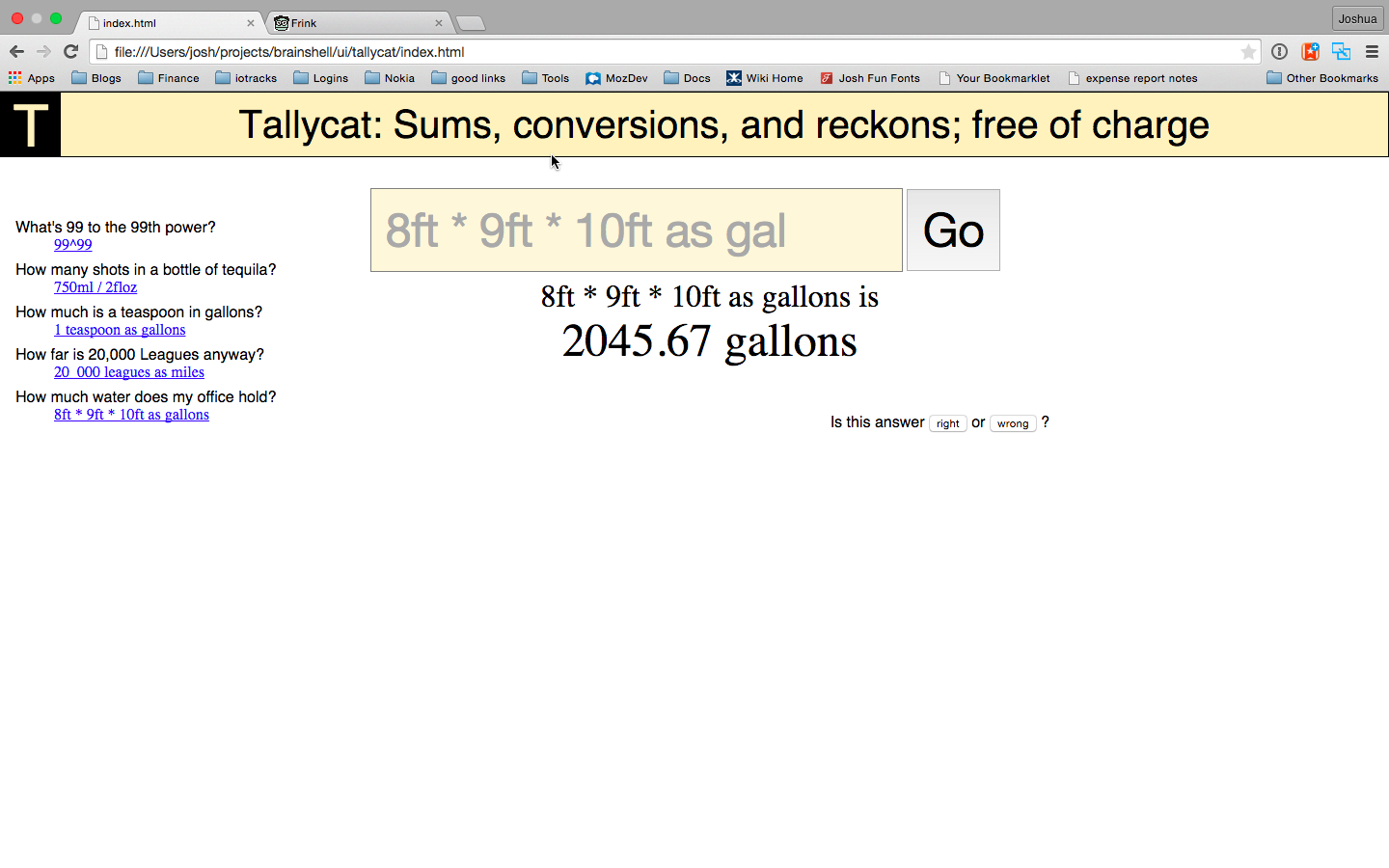 Brainshell was also the inspiration for silly.io, since we'd need a collection of reliable general data sources and Wikidata isn't likely to give us that. But that's a story for another day.

An early version of what became IdealOS. Could you build an entire OS out of a scene graph and a database. Yes, but it's hard. Duh! 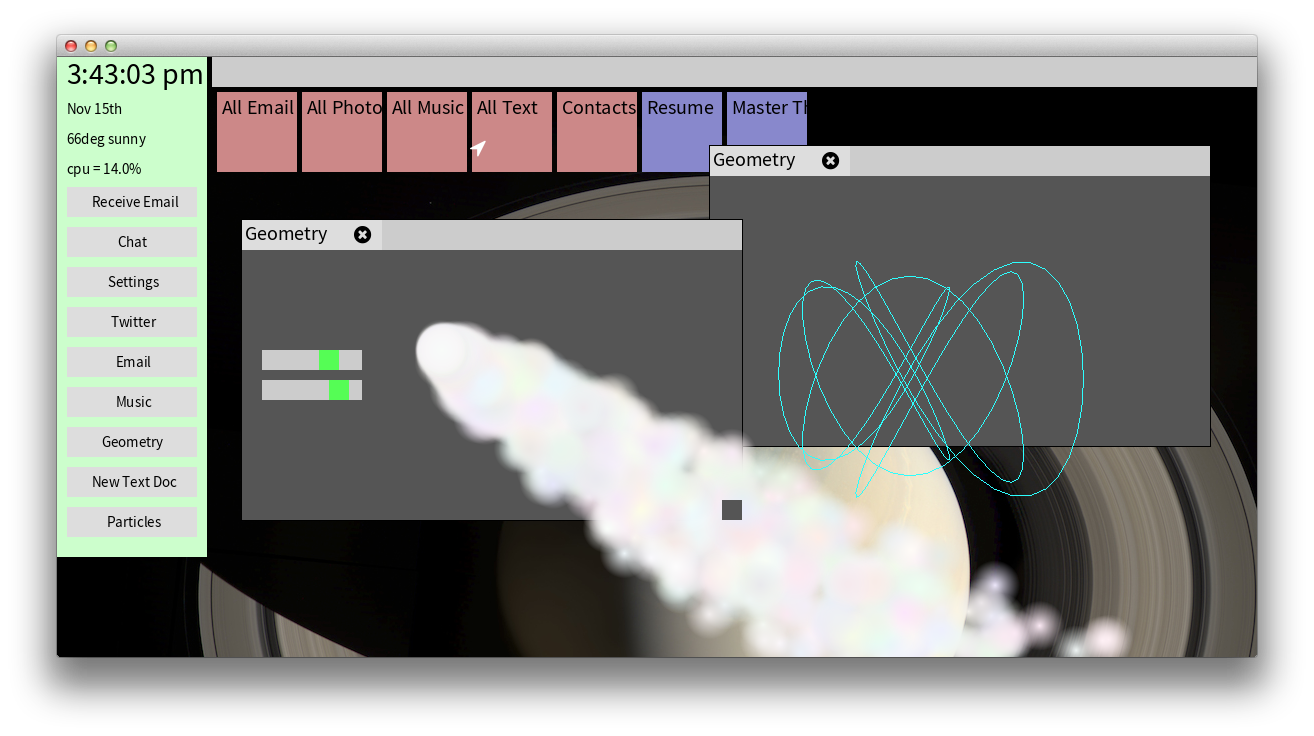 An early smartwatch prototype. It turns out industrial design is really hard.

A drawing app I build for the HP Touchpad with an interesting twist. Since we have multitouch let's use two hands. One for controlling the tools area with color picker (lower left), then the actual drawing with your right hand. 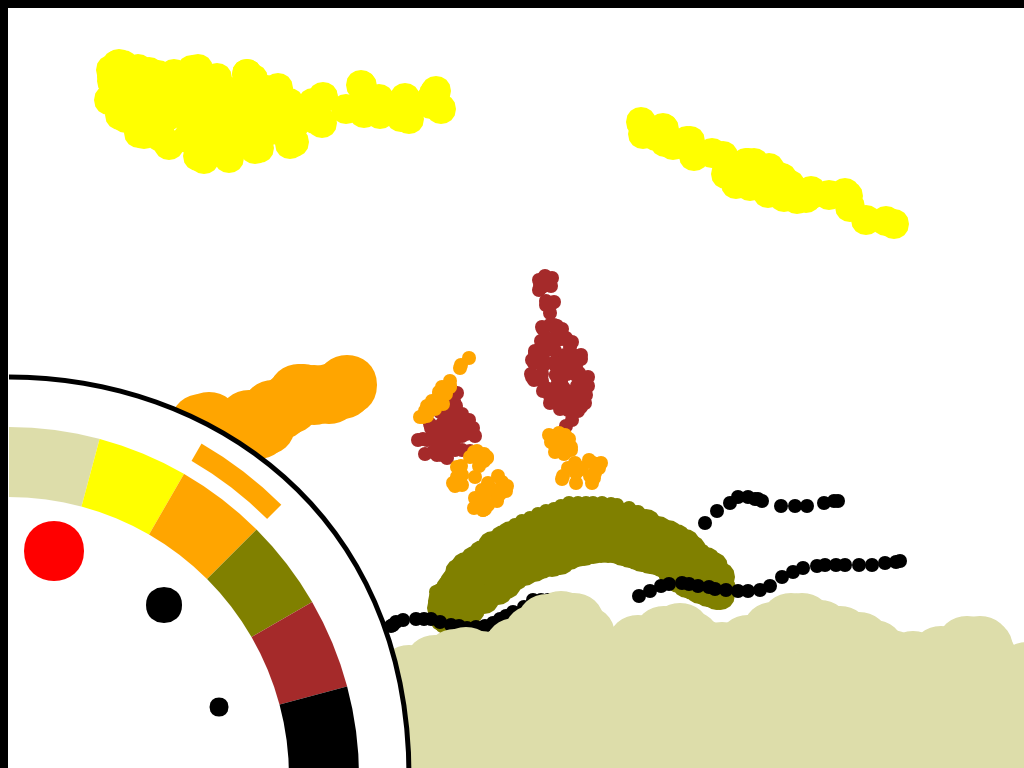 And finally, everyone loves pixel art.

This was the dashboard for a physical model city we built to show off 5G tech for city wide IoT applications. The dashboard mirrored the physical model, showing water flow, temp sensors and the state of the street lamps. It also had a parking sensor with a little animated police officer who would issue tickets. Built for Korea Telecom at a mobile conference.

That's not actually everything. I'm sure I could dig out more old projects, but these seemed to have the biggest teachable points. I still want to see something like Ideal OS and Brainshell take off, and I really do plan to get back to Silly.io at some point, but for now that's all. Have a good week.